In the second episode of the Startups Without Borders podcast, we get up close and personal with Aline Sara, the founder of “Natakallam.” The EdTech startup connects language learners with refugees, leveraging on partnerships with universities like Columbia and Yale.

Aline Sara came up with the idea of Natakallam as a result of a very interesting mix of circumstances: her Lebanese origins, her studies in Human Rights, her early exposure to language learning, and her family tradition to go back to Middle East every year.

Today, her startup connects refugees to remote work opportunities in the language sector, providing them with economic empowerment, boosting their skills, and fostering friendships worldwide, while changing the narrative on what it means to be a refugee.

Aline was born in the US to Lebanese parents, who had to move to New York during Lebanon’s civil war so that her father could continue with his medical studies. Growing up in the US, Aline was exposed to multiple languages: she spoke English, French and a bit of Arabic at home. Her parents made sure that she and her siblings stayed close to their origin and to their roots; so every summer, the family would fly back to Lebanon to visit relatives when the conflict wasn’t too strong.

Having grown up very attached to her homeland, Aline developed an early interest in issues related to human rights, social justice and conflict resolution, and moved back to Beirut in 2008 – where she spent four years working as a journalist. It was there that she witnessed the Arab Uprising and the resulting refugee crisis. 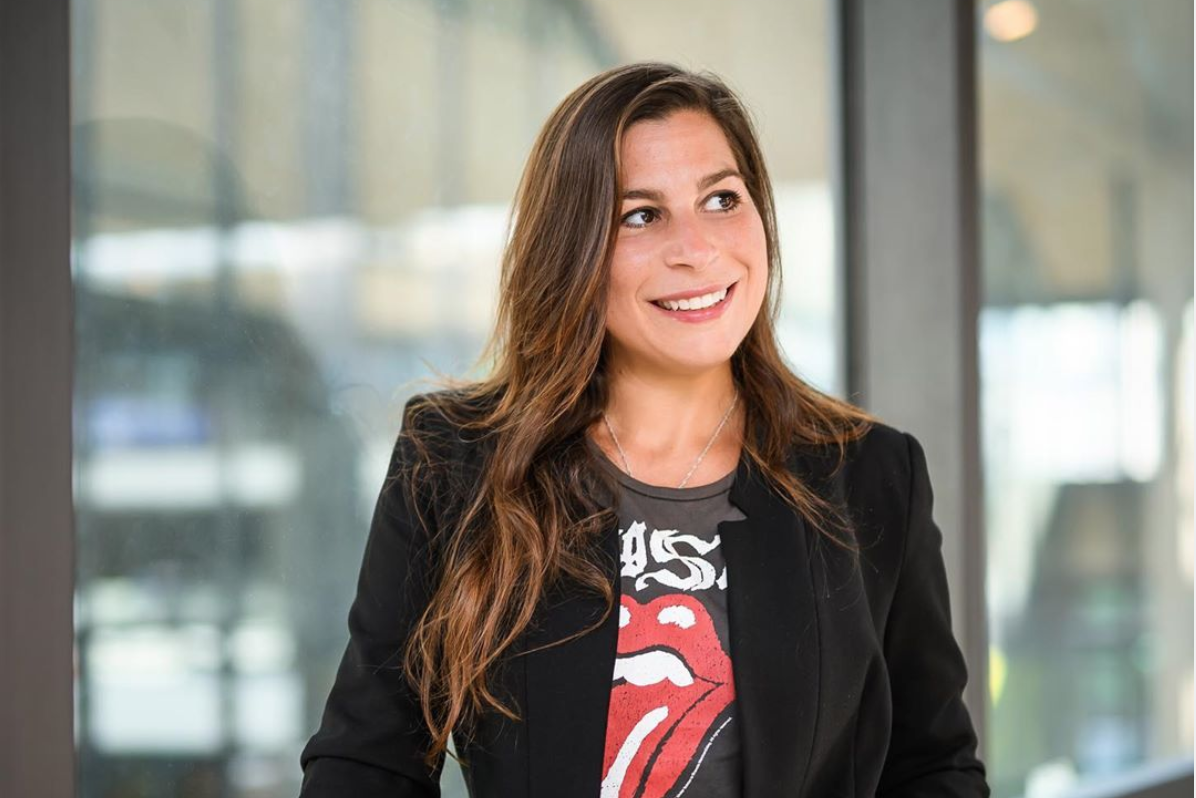 “I understood why the Lebanese were concerned about giving all the Syrians jobs, because the Lebanese were struggling to get jobs,” she says, as she recalls her experience in the Levantine country. “So I thought: what can we do, that won’t affect the Lebanese and their opportunities, and is outside the local economy? That’s when I thought: language learning through the internet and the freelance economy.”

The driven Human Rights advocate studied Conflict Resolution and Communications during her masters, and has also obtained a Bachelor degree in Psychology with a minor in Philosophy. Looking at things from the psychological perspective has been something constant in her work, often putting herself in the shoes of the Syrian refugees who had been robbed from any future and robbed from any hope. “If today was then, my parents would have probably been refugees trying to look for asylum somewhere,” said Aline referring to her parents moving to the US during Lebanon’s civil war.

“I thought: what can we do, that won’t affect the Lebanese and their opportunities, and is outside the local economy? That’s when I thought: language learning through the internet and the freelance economy.”

As a result of her upbringing, her interest in social justice, languages, and her experience in Lebanon, Aline thought of a way that could provide a source of income for refugees without affecting the economy of their host countries. The answer to that was Natakallam, the language-learning online platform that fills two needs with one deed; on the one hand, they provide access to income for refugees and displaced people in a very dignifying way through teaching their language. On the other hand, the platform offers a unique way for language learners to practice the Arabic dialect.

So far, Natakallam has grown from a startup into a movement that provides over half a million dollars in cash to displaced people around the world, while raising awareness around the daily challenges of fleeing conflict zones, through academic partnerships with universities including Columbia and Yale.

From its early days, universities came up as a natural partner to drive users – and Natakallam’s impact – as the startup would act as the institution’s ‘Language Lab.’ “It was a very natural decision for us to bring Natakallam into the classrooms of universities, and later at the school level. “When you do this, you are also changing the narrative, you are letting students directly engage with refugees, hear their stories, hear the politics and what it all means, breaking down stereotypes and offering an alternative source of news.”

“When you do this, you are also changing the narrative, you are letting students directly engage with refugees, hear their stories, hear the politics and breaking down stereotypes.”

Partnering: it’s about a win-win situation

Having begun with partnerships with local on-the-ground NGOs, the startup is now also partnering with corporations, offering not only classes but also translations. “The idea is that it is not only a service they need, but it’s also one with a powerful social impact. We are living in an era where giving back and being a responsible corporation is key. Consumers now really care about buying from companies that are socially responsible.” 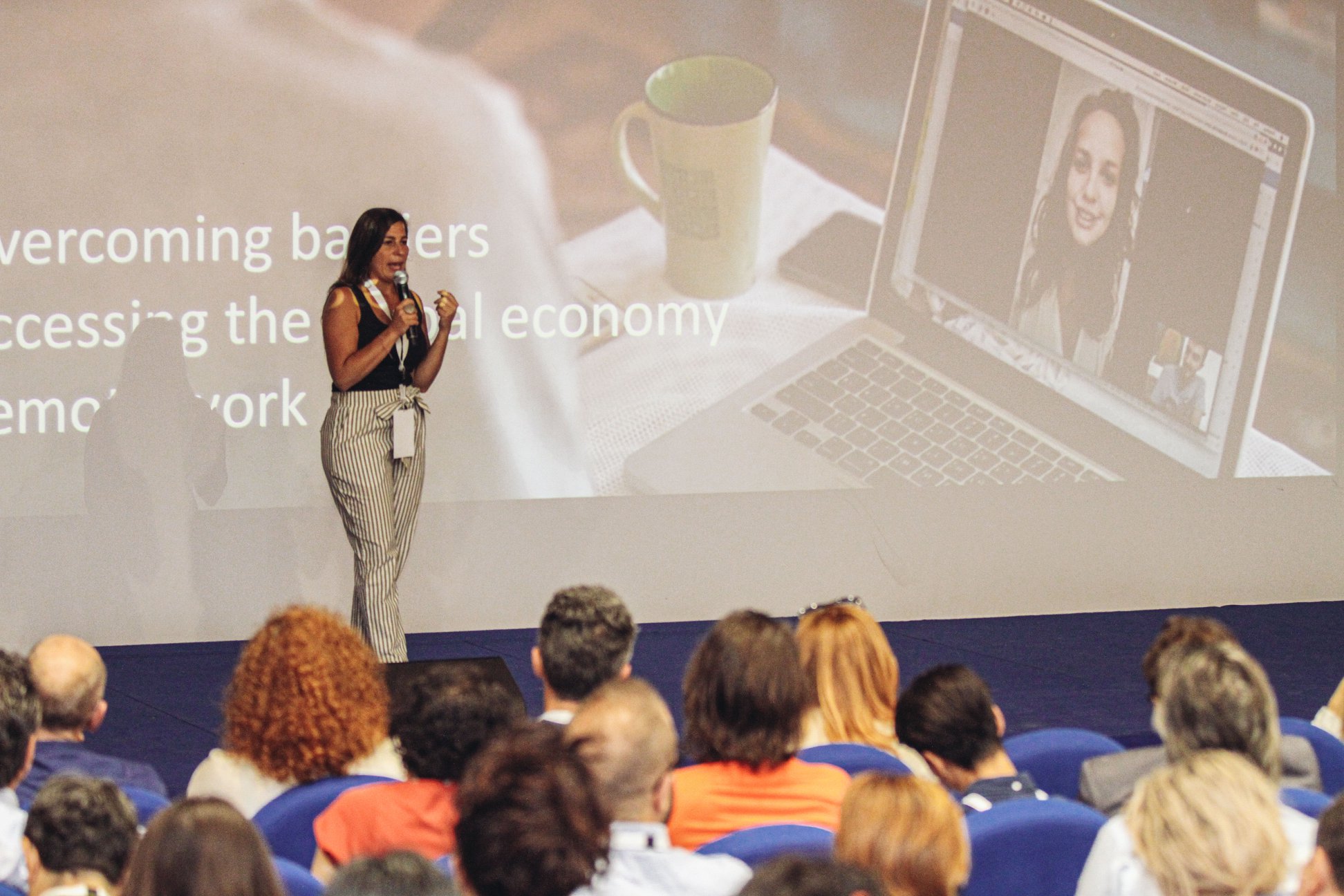 “We are living in an era where giving back and being a responsible corporation is key. Consumers now really care about buying from companies that are socially responsible.”

Looking back at her company’s  journey, Aline shares some tips on how to identify partners and secure smart collaborations. For example, if you’re a social startup, looking for companies that are seen as socially responsible, studying their needs and understanding their previous footprint of social impact. Furthermore, during negotiations, you need to highlight the benefits of this partnership for both sides in terms of value and outcome. “You have to show what’s in it for them, too,” she says.

“If you’re a social startup, look for companies that are seen as socially responsible, study their needs and understand their previous footprint of social impact.”

In order to secure collaborations with a partner, you need to leverage your network, find a personal contact with them, or find someone who can introduce you to them. That will give you an unquestionable advantage and increase your chances of starting the conversation with them. You can also try cold calls or cold emails, but they are not guaranteed to secure you a partnership as much as having a personal contact, Aline explains.

“You need to look at who seems to care about what you are doing. Of course, when we were focused on the Middle East, a lot of interest came from organizations from that part of the world,” Aline recalls. “But you have to throw yourself out there,” she clarifies.

Another key to succeed at securing partnerships is persistence; keep checking in, keep sending emails, and keep knocking on doors till you make it. “We have been trying to secure partnership with a company for almost two years now” said Aline. “I used to think to myself that I’m not going to bother the person and keep sending them messages and follow-ups, but I realized that it is actually very important in today’s world because we are constantly bombarded by hundreds of emails and text messages that we tend to forget things, so people might appreciate you reminding them.”

“You have to accept that you might get a lot of rejections, but don’t let the ‘no’ bring you down and think that it’s over,” she concludes.

Listen to the full interview on the Startups Without Borders podcast, on Apple Podcasts, Spotify, Spreaker, or Soundcloud.