Ana Álvarez Monge is an unstoppable force from Costa Rica that is changing the face of entrepreneurship in Germany. In the 4th episode of the podcast, she dives into the nits and grits of funding your startup idea – especially when you are a newcomer in a new land.

Starting your business from the ground up can be a difficult and stressful challenge. And no matter how great your ambitions are, your startup is in big jeopardy if you don’t secure it with a financial plan for its sustainability and success.

A coach, university lecturer, consultant, and a mentor, Ana Álvarez Monge is herself a migrant entrepreneur and the founder of Migration Hub, a collaborative network for social entrepreneurs and a platform for migrant entrepreneurs, which was recognized as one of the 100 Landmarks of Germany. As she narrates her journey looking for various sources of funding for her business, she offers budding entrepreneurs valuable advice to manage the financial aspects of starting up.

Three years ago, Ana decided to leave her home country, Costa Rica, and move to Germany to help refugees. It was a time when Germany was welcoming asylum seekers from Syria, and civil society – as well as the private sector – had gathered to welcome refugees at train stations, locate them, and host them in their houses. “As a person coming from Latin America, I hadn’t seen anything like that before, I was inspired,” says Ana. But the entrepreneur had come from Costa Rica not only to provide future prospects for migrants in Germany, but also to change perceptions. 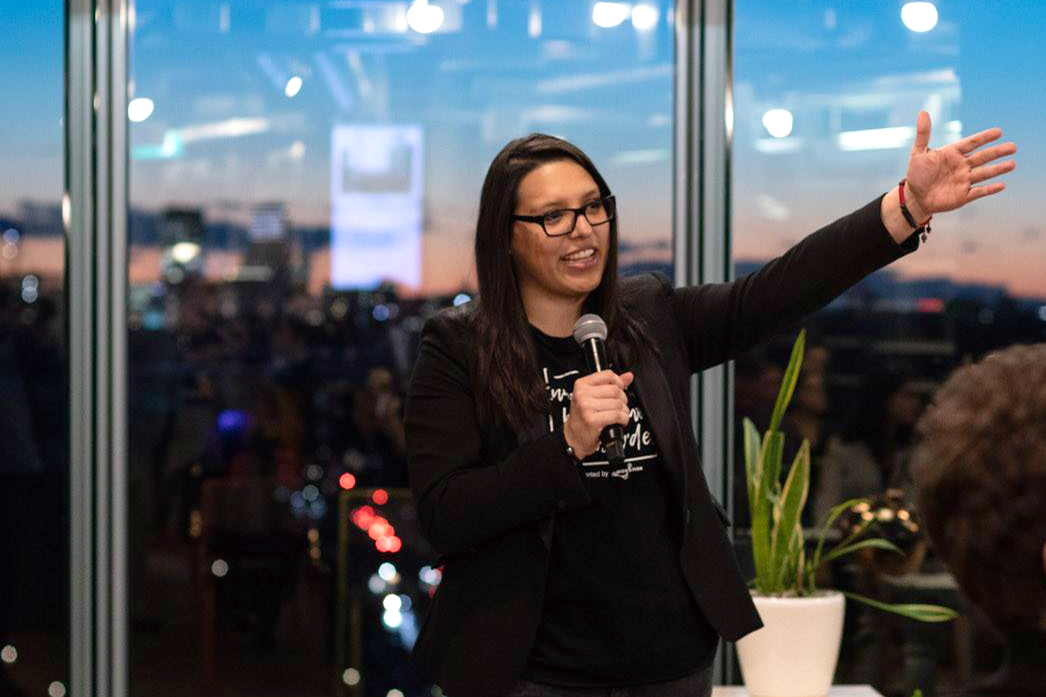 “I joined a group of volunteers who were eager to support the newcomers; it was called 180 degrees. The group was operating in almost 100 countries to consult social entrepreneurs, but was established in Germany. And the first project I worked on was to build a co-working space for asylum seekers and innovators,” she says. Not expecting to become an entrepreneur herself, Ana’s first project somehow led her to build her social business, ‘Migration Hub’.

“As a person coming from Latin America, I hadn’t seen anything like [the Refugees Welcome movement] before, I was inspired.”

Migration Hub is a network made up of social entrepreneurs who work in the field of migration and asylum seeker support, and offers to share spaces together and create a community. “We constantly have events in many sub-topics around this one topic of migration. We gather and discuss financial inclusion, resettlement or education. So we act as a platform as we also provide mentorship for non-local entrepreneurs. We did this with Singa Business Lab, as we wanted to explore the opportunities and the potential that migrants and refugees need to discover to become entrepreneurs,” Ana recounts.

Ana finds it hard to access funding, which is why she’s very passionate about educating people about this topic. Along the way, she managed to learn the do’s and don’ts. “Funding is a difficult matter, especially for women, as investors are most likely to give money to male founders than female entrepreneurs. Plus, your chance is weak if you are a migrant because there is a perception of where to put your trust,” Ana explains.

“Developing patience is a muscle that we must learn to work out. People who give away the fund know this very well, and they want to know exactly who you are and what you’re going to develop over the years.”

“Developing patience is a muscle that we must learn to work out. People who give away the fund know this very well, and they want to know exactly who you are and what you’re going to develop over the years,” she advises, adding that it takes time to know your expenses and its varieties before applying for a fund. 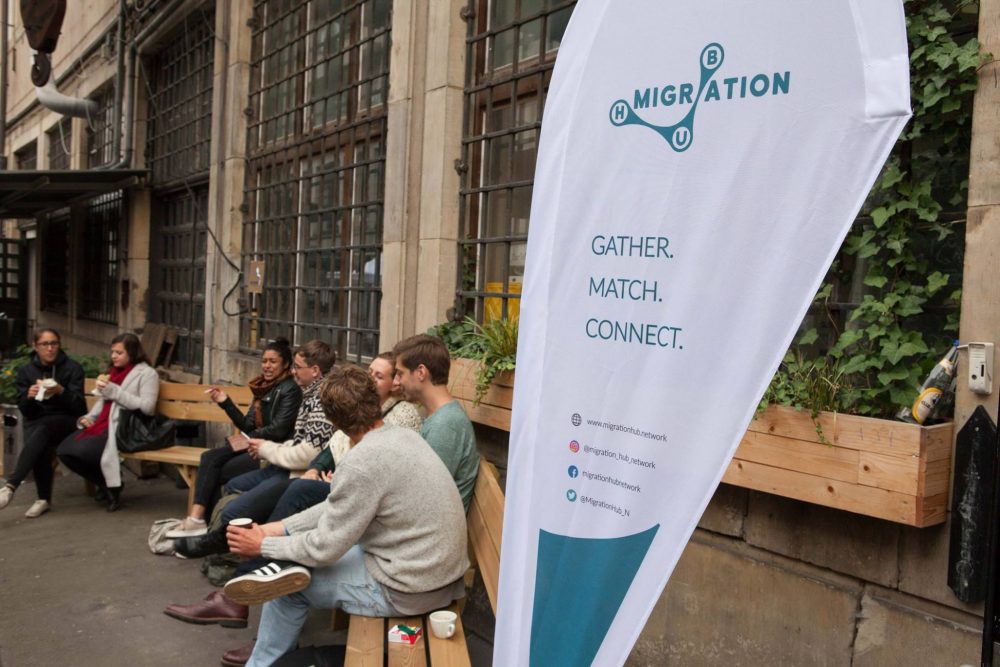 Set close to the Spree river, Migration Hub is a co-working space and a hub for migrant entrepreneurs. Photo credit: Migration Hub.

The power of collaborations

However, means of funding can be found through collaborations and partnerships; that’s why Ana built the ‘Migration Hub’ network. Many social entrepreneurs compete for one source of funding, but the trick is to find ways of collaboration through which you learn to add value to people around you.  “I like to say it’s like a marriage; it begins with everyone celebrating the beginnings and with time, it grows bigger when you get to know each other, and when you keep nurturing the partnership is when you add value to your company,” she adds.

“In general, all migrants, refugees, and asylum seekers are disconnected from reality, meaning that they arrive in the host country where they know nobody,” she explains. “So they need to be connected to like-minded people and then they will learn how to grow their businesses. The means of support and contacts they get from their network can make a huge difference,” she says, advising migrant entrepreneurs to go to events, attend workshops and show up; in the long run, this will make them more knowledgeable on the sources of funding.

In theory, refugees can get more support because they have legal protection and can get a working permit after that; the country also might provide them with a self-employment permit and so it becomes easier for them to become entrepreneurs. It’s harder for migrants who relocate for economic reasons, as they have a long way to get the permit and hence start their businesses. However, it also depends on the legislation and the country.

Part of the role of ‘Migration Hub’ is to advocate within the ecosystem, as it’s becoming now more interested to change their minds and help migrants and entrepreneurs to start their startups. “That’s what I did when I first arrived in Germany, I had to reach out for the ecosystem and connect with these resources to help me out and a bit by bit, they change perceptions” Ana says. 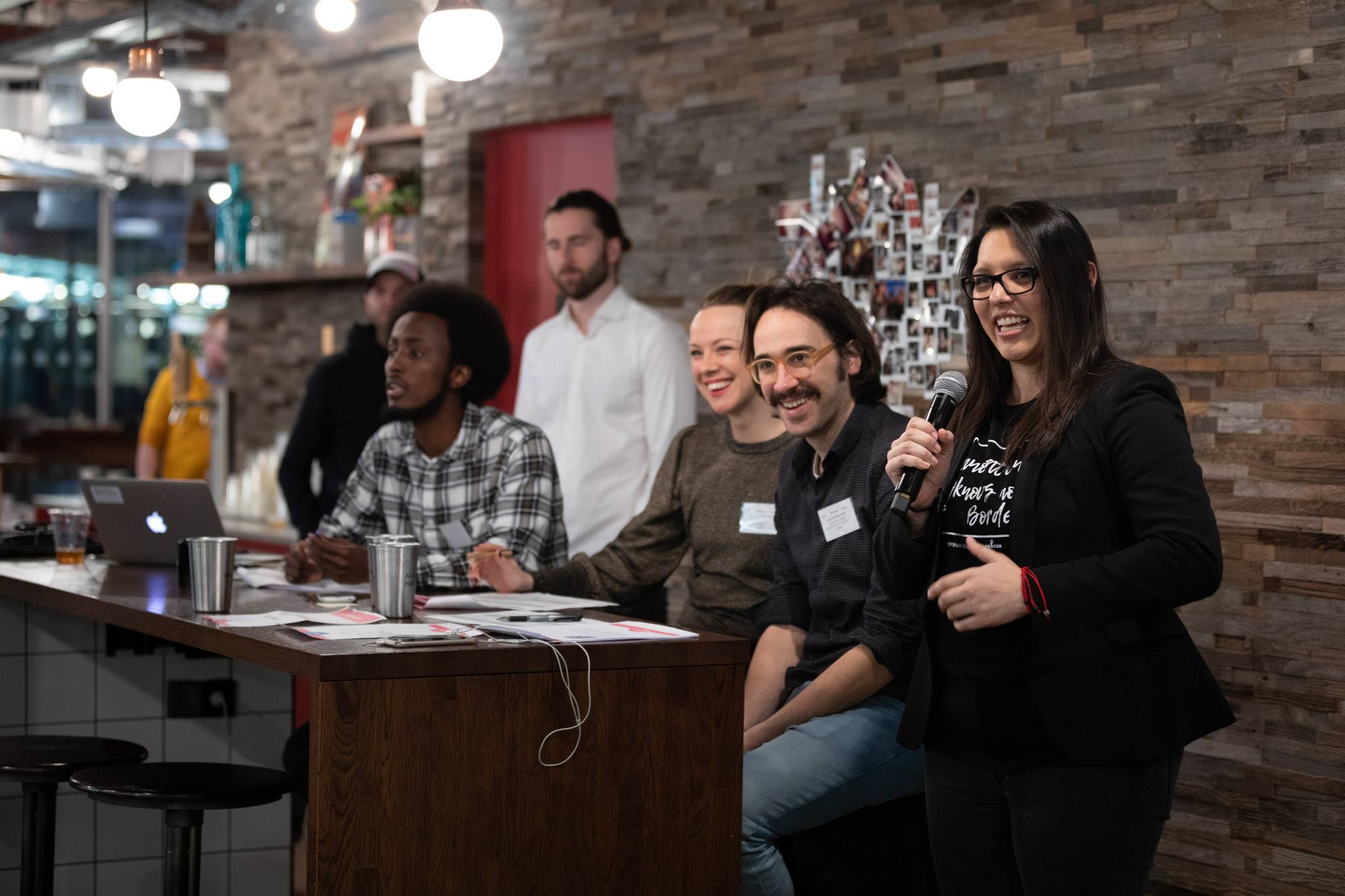 One of the events organized by Migration Hub, in partnership with WeWork.

Ana also recommends migrant entrepreneurs to be realistic, as starting a business is not an easy process and no great company is built overnight. “That’s why developing the muscle of patience is crucial, because you can grow your business quickly but the ecosystem won’t change as fast. So we tell them that if they didn’t get the fund, there’s a reason and that there’s something they have to change,” Ana adds.

Despite many of the entrepreneurs in the network have side jobs or scholarships, funding the start of a business implies added expenses. Ana advises them to join communities, incubators and later accelerators which can later give them funding in exchange for equity. However, as soon the company starts making revenue, it is important for the entrepreneurs to pay themselves a salary. 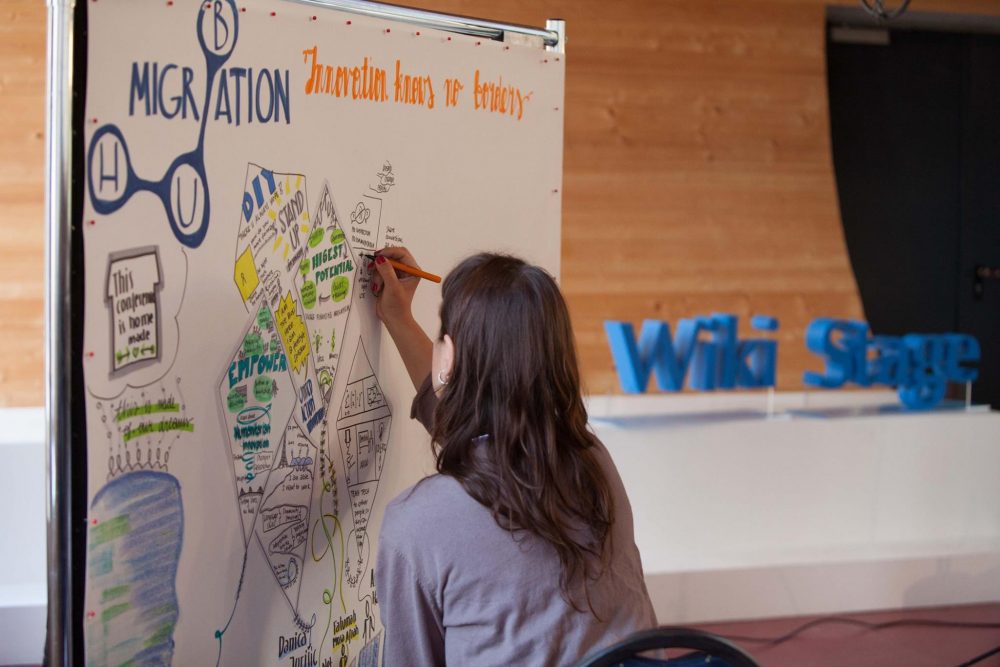 “Innovation knows no borders” was one of the many events organized by the hub.

“One of the main things I learned is to think of yourself as an entrepreneur. If I’m making money and not covering myself then it’s a problem,” she states.

“One of the main things I learned is to think of yourself as an entrepreneur. If I’m making money and not covering myself then it’s a problem.”

“The most important investment that you’re gonna do is on yourself. Employees and the team will come and leave because at the end of the day, it’s your idea, so it’s your liability. So first find a way to sustain yourself,” she says. “I always advise building a network where you can attract more angel investors. The angel investors are investors who are going to inject money in your company either in taking equity or by payback like a loan. You, the entrepreneur, have to be your own priority,” she says.

The entrepreneur stresses on the importance of “knowing your expenses” before seeking funding. “I say: always try to imagine and visualize everything you need to add to your expenses, and first learn to build a budget. Ana’s experience in Costa Rica’s Ministry of Finance gave her a background in financial planning; however, the reality in Germany is radically different.

“Here in Germany to establish a company, you need to finish a lot of papers and there is a lot of legislation. We try to inform our entrepreneurs with the things they have to build a budget for,” Ana says. 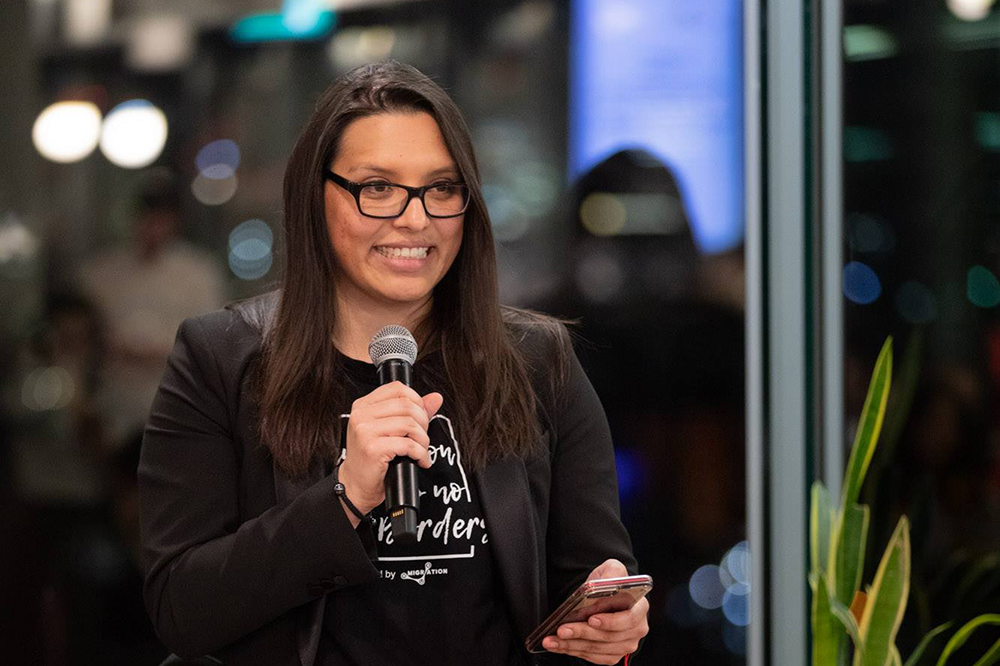 “When it comes to your expenses, always write down all your expenses and allocate them in different groups, so if for example, you found you need to have an office, try to work in a co-working space that offers this facility,” she explains, reminding entrepreneurs that “it may take up to 5 years for a startup to be consolidated; then you’ll have the real budget you need.”

“It may take up to 5 years for a startup to be consolidated; then you’ll have the real budget you need.”

“My advice is to try to save as much as possible at the beginning, invest in yourself, and try to scan in your current country legislation. These days there are many templates available on the internet to build your financial planning,” she says.

Listen to the full episode on the Startups Without Borders podcast, on Spotify, Apple Podcasts, Soundcloud, Spreaker.