The inaugural International Investor Pitch Competition organised by Forward Incubator saw five startups based in the Middle East pitch to a crowd of investors and battle it out for a cash prize of 5,000 euros. The event was coloured by an expert panel of founders and by the engaged audience of international investors, who have since reached out to all five entrepreneurs for further talks.

The entrepreneurs excited the audience as they all operate in sectors with a particular need for innovation, with tourism, education and retail all shaken up by the global pandemic. Maha, Heba and Shaima have bundled their creative powers as Voyage brings the beauty of its native Egypt to people stuck at home, thus, breaching the oppressive boredom wreaked by a global pandemic.

“Mohamed of Negmstar and Ahmed and Islam of Pigeon Parcel saw opportunity in the changed circumstances, respectively developing a fun educational app for homebound children and an app facilitating international deliveries.”

Likewise, Mohamed of Negmstar and Ahmed and Islam of Pigeon Parcel saw opportunity in the changed circumstances, respectively developing a fun educational app for homebound children and an app facilitating international deliveries. Add to this Abdullah and Sara’s smart accounting app Cashier and Salah’s graphic design platform Vexls which both support SMEs in the Middle East, and you’ve got yourself a bright bunch of exciting entrepreneurs brimming with solutions to everyday challenges. 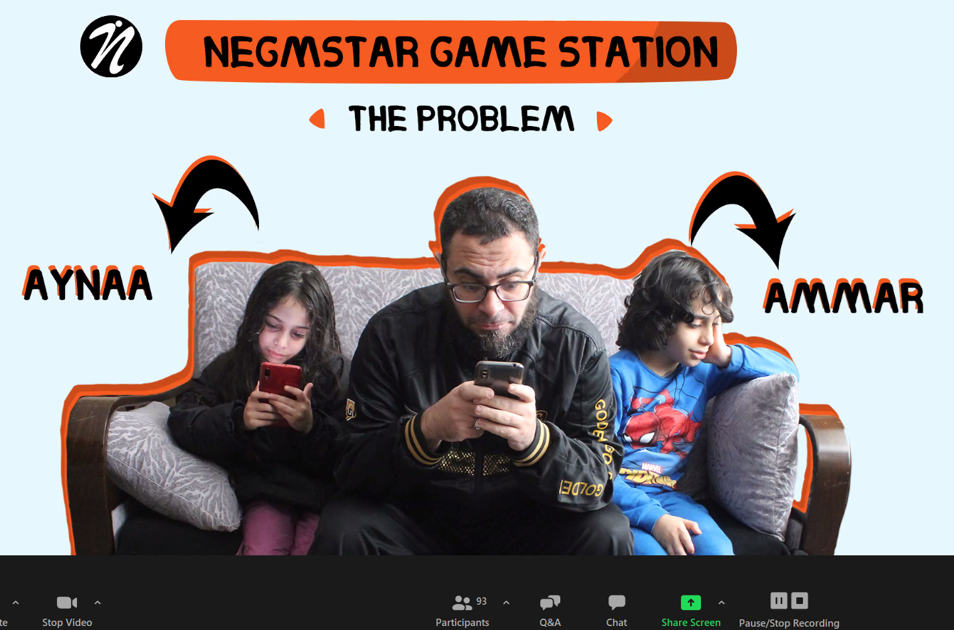 The entrepreneurs pitched their ideas live to a crowd of over 100 people, including an expert panel of Spark-CEO Yannick du Pont, Hiber co-founder Ernst Peter Hovinga and the founder of Startups Without Borders, Valentina Primo. Mohamed’s NegmStar, won a cash prize of 5000 euros awarded by the jury, and Cashier-founders Abdullah and Sara were the winners of the hearts, as they won the popular vote by a small margin.

The event was opened by Mygrants’ own Christian Richmond Nzi who had inspirational words for the entrepreneurs and attendees with migrant backgrounds and for the investors rearing to have an impact.

Mygrants provides access for migrants to fundamental information and training programmes, so as to open up “opportunity in adversity” highlighting the skills and talents of migrants, to match them with the most suitable jobs in the market. Christian spoke of how investment, a tenacious drive and healthy team dynamics helped his dream become a reality. 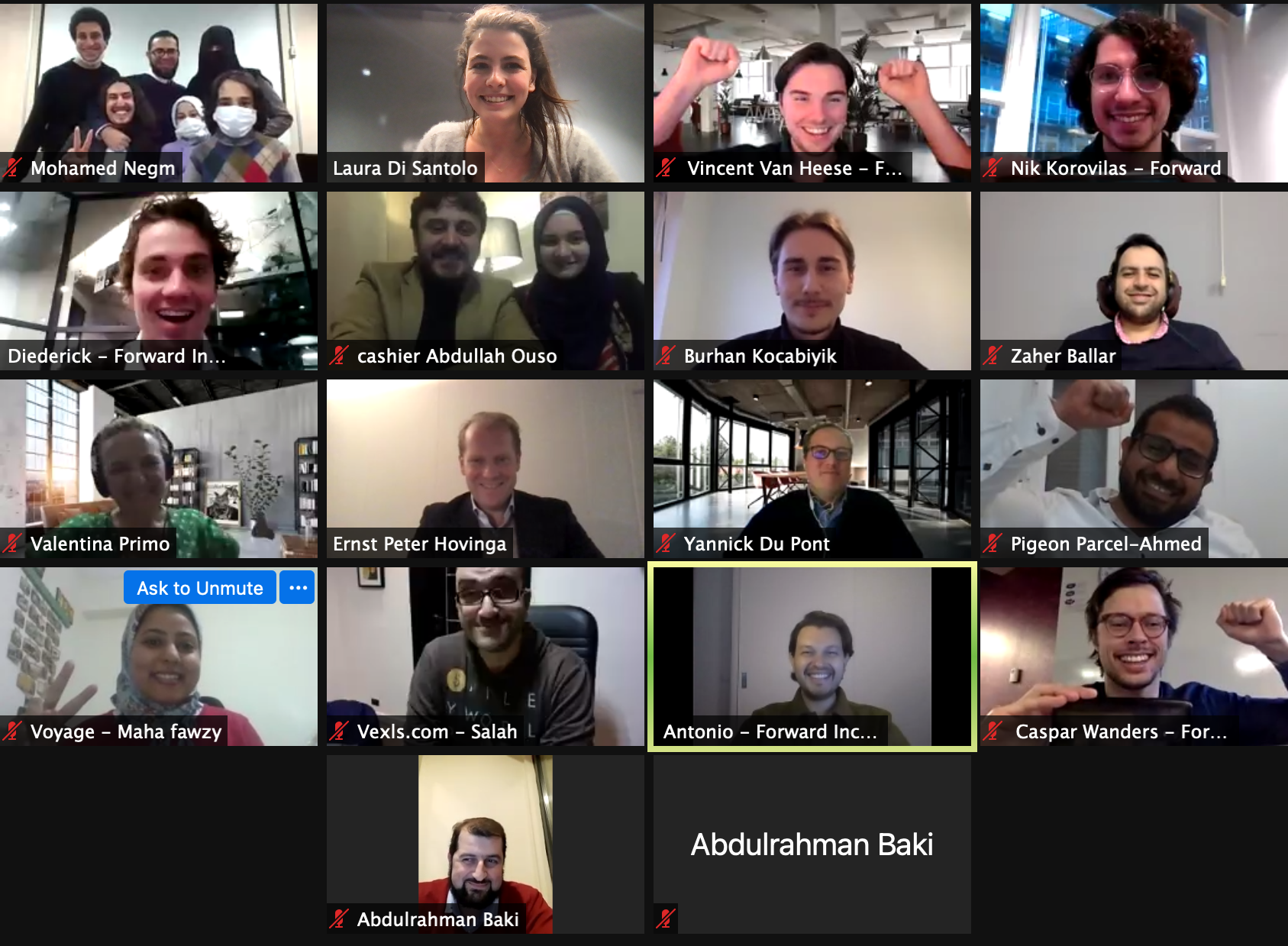 Forward Incubator founders Laura Di Santolo and Diederick van der Wijk then introduced FI with a short presentation on its mission and ways of working. Following these opening remarks, it was time for the entrepreneurs to, one by one, present their pitch and answer questions by the jury live!

Salah El-Din Mohamed started the round of pitches off by pitching Vexls – an easy-to-use platform for graphic designers based in the Arabic world which won the Second Prize at the Startups Without Borders Summit 2019, in Cairo,

Vexls takes into account local design aesthetics, and offers creative designs and accessible templates for all. Salah illustrated the current state of Arabic advertisement, by showing a food salesman advertising with a rather graphic display of raw meats on a flyer. With a few simple yet effective interventions, which Salah cooked up for us live on stage, Vexls is able to offer him an attractive campaign that appeals to his target customers and beyond.

Next up was the energetic Maha Fawzy who presented Voyage, an app she has developed with co-founders Heba Hatem and Shaima Foaud. Voyage offers exciting travel tours to international tourists, and has even developed covid-proof video tours of Egypt. Their app opens up tourism in these constricted times, but also to people unable to travel due to other limitations.

Ahmed Farrag then presented Pigeon Parcel, an application that connects shoppers to international travels to deliver goods in a cheap, fast and assured way.

The app enables Omar, an Egyptian “tech-freak”, to get the newest smartphone delivered from the UAE days after the release date and Hassan in Cairo to send his sister in the UAE her university transcripts in a secure way.

Syrian entrepreneur Abdullah Oso and his partner Sara have developed a mobile application which helps small shop owners to manage their accounts in a smart and efficient manner. With Cashier’s app, SMEs have no need for an expensive accountant or complicated accounting software. Cashier manages your cash flow readily and provides the store owner with access to constantly updated information about their financial status. Moreover, the app includes a handy barcode-scanner and enables easy tax declarations.

“Syrian entrepreneur Abdullah Oso and his partner Sara have developed a mobile application which helps small shop owners to manage their accounts in a smart and efficient manner.”

Finally, Mohamed Negm pitched his start-up Negmstar with the help of his two young children, Ammar and Aynaa. Like millions of children, they were unable to go to school, had to stay at home and their learning was a great concern to their parents. This was worsened by the lack of access to electronic devices and fun ways to learn new things.

Mohamed did not sit idle and took it upon himself to develop educational animations and games for his children’s homeschooling. Negmstar offers fun ways to learn skills such as writing, reading, math, coding and even applied physics. There are six games now on the market with over 13,000 downloads. With the right investment, Mohamed hopes to reach 10 million downloads in the first 3 years by improving software, hardware and Negmstar’s marketing efforts. 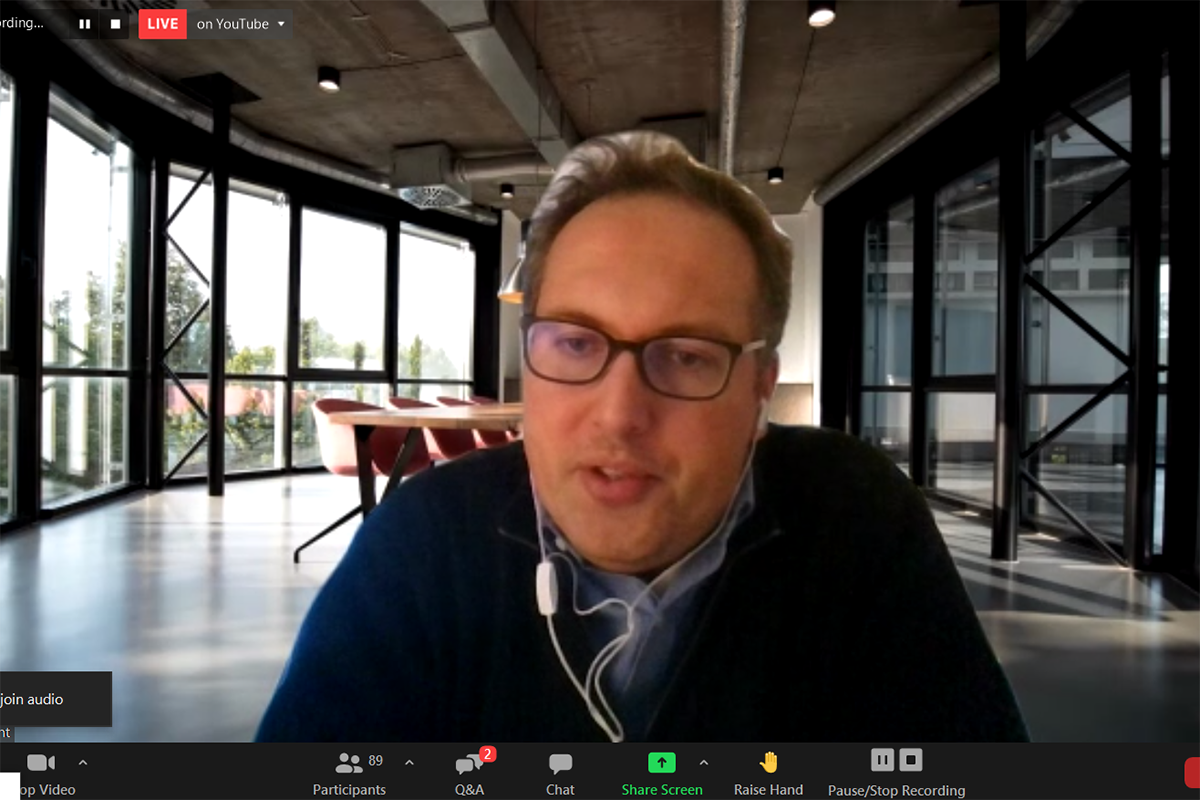 Following the presentations, the jury convened to debate and pull hairs, assessing the merit of each investor pitch. We hear tensions rose and tempers flared, as it was a close call with all startups being well represented and offering innovative solutions to pressing problems. Meanwhile, two other FI-entrepreneurs, namely Burhan Kocabiyik of ARSpar and Spermly-founders Zaher Bahar and Abdulrahman Baki, presented their pitches to an engaged audience, who also expressed their preferences in a public vote for their favourite pitch.

As the jury rejoined the plenary session, Cashier was declared the popular winner of the evening, and a delighted Abdullah and his co-founder Sarah proudly accepted the award. A drum roll for the main prize of the night followed. When Valentina Primo announced the winner on behalf of the jury, a household in Turkey erupted in joy, with Negmstar’s founder Mohamed tearfully accepting the prize and dedicating his victory to the “women in his life” and his supportive family. This crowned a night of creativity, buzz and salesmanship, as new connections were made and supporting entrepreneurship in the Middle East became a focal point of Forward Incubator’s organisational mission.

Inside Amsterdam’s Only Arabic Bookstore Cafe: Meet the Syrian Entrepreneur Behind ‘Pages’

Podcast: Why Diversity is Important in a Startup Ecosystem?