Tey Elrjula and Suleiman Ali founded FLUUS, the MENA’s first localized and keyless cryptocurrency wallet, based on the idea and need to use cryptocurrencies in locations where banking does not exist. But behind their burning desire to put blockchain at the service of people, there is the fascinating story of two refugees whose journeys met right where technology and sovereignty intersect.

Unlike global organizations like Unicef and the UN, FLUUS is a crypto wallet set out to make governments angry. This is, more or less, the censored version of what Tey Elrjula, the co-founder and CEO of FLUUS, had to say about his company whilst giving a talk at Blockchain Week Rome 2022. Tey, along with co-founder and CTO Suleiman Ali, embarked on this project just over a year ago after meeting at our very own Startups Without Borders Summit in Rome. With their platform scheduled to launch by the end of this year, FLUUS plants to provide a full backing infrastructure to the ‘invisible’ people around the world.

To better understand the origins of this project, one must take a step back and understand how this all came to be. Tey Elrjula, also known as the ‘invisible man’, is a Syrian entrepreneur that spent two years in a refugee camp in the Netherlands after his work contract expired and he was asked to return to Syria. 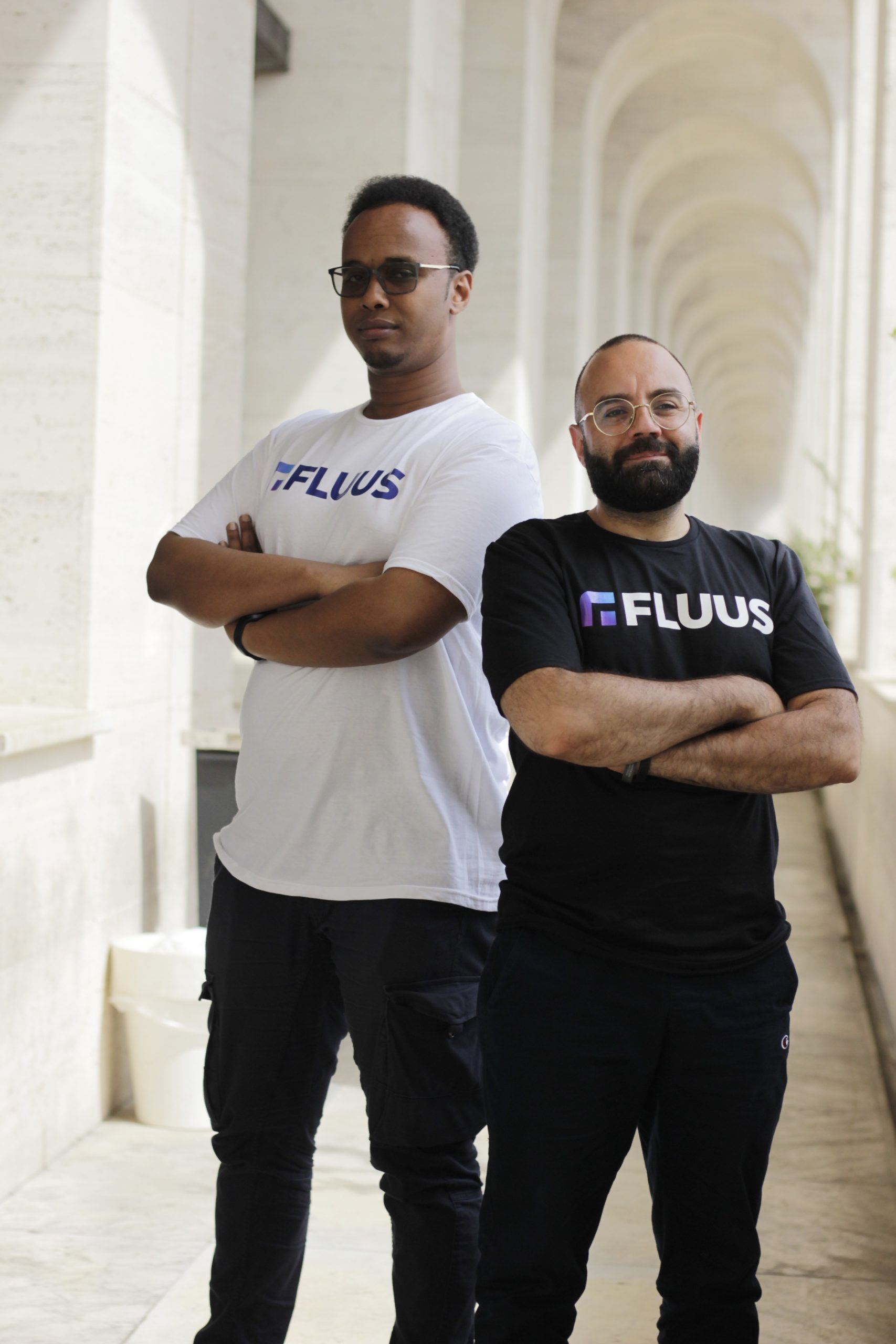 In the refugee camp, he not only completed a MSc in Digital Currencies and Blockchain Technology, but he also committed himself fully into understanding the world of crypto. After ordering pizzas to the refugee camp using the infamous cryptocurrency known as Bitcoin, he realized the enormous potential that crypto had.

“I saw Bitcoin as a premium. When I went to the refugee camp, I committed full time into it because it showed me that people without an identity can have a bank. This is massive. There are 2 billion people around the world today who don’t have a bank,” Tey explained with a certain enthusiasm.

“I saw Bitcoin as a premium. When I went to the refugee camp, I committed full time into it because it showed me that people without an identity can have a bank. This is massive.

A story for the books

As Tey explained his story, his partner in crime, Suleiman Ali, listened and watched with a certain wonder in his eyes. And, even though Tey has already written and published an autobiography titled ‘The Invisible Son’ recounting his story, Sule’s journey is also one for the books.

Suleiman Ali is originally from Somalia, but he grew up in Saudi Arabia, the home he was forced to escape from as a political refugee 8 years ago. At the young age of 19, he fled to Germany and later Italy, leaving family, friends, and everything he knew behind. Since leaving, he hasn’t been able to go back home. All of this did not stop Sule from reaching for the stars.

Although Sule never completed his university degree after leaving Saudi Arabia, he taught himself everything there was to know about programming, blockchain, computer science, crypto, and other spaces he was interested in.

“Internet changed my life. It provides democratized information for everyone. I could access information and learn and make a career out of it by having access to internet without having a degree. Blockchain and crypto are doing the same exact thing for finance: it’s for everybody,” Sule outlined passionately.

Tey Alrjula at the Startups Without Borders Summit 2021 in Rome.

Some would say it was destiny that brought these two individuals together who, today, are preparing to launch the FLUUS platform to the general public with verified partners present in multiple countries such as the UAE, Ukraine, Afghanistan, Somalia, and Lebanon.

The service that FLUUS provides allows for individuals in these countries to trade their cryptocurrencies for real cash which is distributed by these partners. Tey and Sule are essentially allowing for these individuals to become their own banks by solely having access to a smartphone.

It’s all about trust

As opposed to big-name platforms and online banks like Revolut, FLUUS always remains at one distance from every single individual on the platform. They cannot ban users or confiscate money. The money is for the people and owned by the people.

“FLUUS, through the brand that we present, guarantees trust. When you work with FLUUS, you work with trusted people who have a reputation that is worth more than what is in a wallet. We have a network that we’ve invested 10 years in building and not all the money in the world can make us compromise that,” claims Tey confidently.

“We have a network that we’ve invested 10 years in building and not even all the money in the world could make us compromise that.”

To confront possible obstacles in operating countries with agents who distribute money, FLUUS has designed a token system that acts as a form of insurance/collateral if an agent decides to not follow proper procedure.

On top of this, users won’t have to deal with the user experience problems that the non-custody part of crypto presents such as having to keep passwords and key phrases written on bits of paper. FLUUS leverages what we all have in common: our faces. Using face technology, users can retrieve key phrases and passwords whenever they want; a breakthrough that opens a  multitude of opportunities. 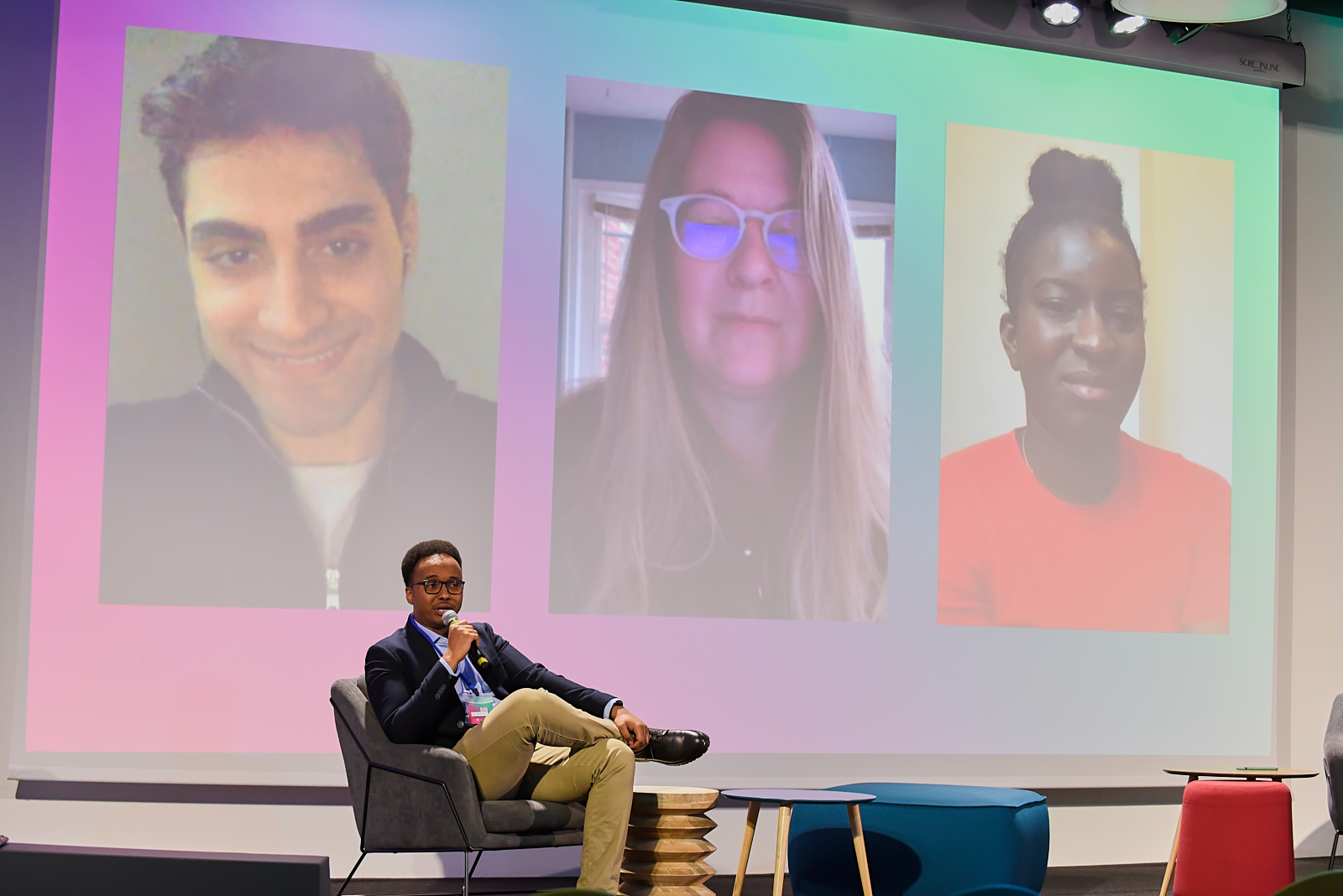 Suleiman Ali at the Startups Without Borders Summit 2021 in Rome, where he met Tey.

So far, FLUUS has shown signs of major promise. Just recently, Tey and Sule were contacted by an international NGO to set up a partnership where FLUUS helps convert crypto into local currencies in Ukraine.

“FLUUS is proving that there is a need for cryptocurrencies, breaking barriers and bringing value and money to places that no one else can reach,” explains Tey.

Efficiency and time effectiveness are two of the main advantages that the FLUUS team has. Tey often speaks of large organizations like the UN as not being effective enough with the funding that they receive.

“You have a Syrian and a Somalian coming together, developing a platform that can hit 6 targets of the UN sustainable development goals in a quicker and more efficient way,”

“The mission that drives FLUUS today is to increase financial inclusion in the world, without waiting for the UN to put up a program. You have a Syrian and a Somalian coming together, developing a platform that can hit 6 targets of the UN sustainable development goals in a quicker and more efficient way,” Tey pointed out with conviction.

The future looks bright for FLUUS and its’ team members, who are working tirelessly towards their main launch, scheduled for the first quarter of next year; a moment Tey and Sule have surely been waiting on for a while now. Despite facing the largest mountains and difficulties, their objectives and determination always remained constant.

For Tey, the key is to choose your team members as people who you can trust, rely on, and depend on. Furthermore, one has to learn how to communicate effectively to properly be understood. For Sule on the other hand, the key is to always be curious. “Try and enrich yourself by learning about what is happening around you and the reasons as to why it happens,” he told me with a smile.