Ahead of the Startups Without Borders Summit, we meet on the the most anticipated speakers: Timothy Docking, co-founder of the Washington-based Refugee Investment Network. As we gear up to discuss impact investment and refugee-led startups, we sit down with Docking to unveil this new frontier in impact investment.

Standing from a long history in the international development field, Timothy Docking dedicates his life towards involving the private and public sector to face one of the modern age’s dire problems: the displacement crisis.

Having matured extensive experience in the development field, from extensive work in the African continent to the US-based “Millennium Challenge Corporation,” Tim moved from there to the private sector, because he always had the feeling that the private sector needs to be broader and more engaged in tackling humanitarian challenges. It was this combination that led him to co-found the Refugee Investment Network (RIN), an impact investment and blended finance collaborative dedicated to creating solutions to forced migration.

As we gear up to kick-off the Startups Without Borders Summit, we take a closer look at refugee-focused investment, as Tim prepares to participate in our panel on impact investment, in partnership with UNDP.

How did you get involved with the Refugee Investment Network? Can you tell us a little about your professional journey?

I launched the Refugee Investment Network (RIN) along with John Kluge. RIN is an investment intermediary that brings together capital from across the capital continuum; we do this through impact investors and concessional finance, such as foundations and donors. Rather than commercial capital, we bring the interested capital together with refugee investments, refugee entrepreneurs, organizations, and displaced-owned enterprises and engage them with the host communities.

After I worked for nine years in corporate America – IBM Corporation – to learn how businesses operate in emerging markets, I co-created the Refugee Investment Network as a social enterprise with a dual mission of creating social impact while being a self-reliant and self-sustaining program.

We looked into what are the big problems that need to be solved, and we knew that one of the greatest challenges we are facing today is the displacement crisis. So we try to bring in the private sector to help solve this problem.

“Policies often ironically restrict the freedom of displaced people and create more problems than they solve. We created the Refugee Opportunity Index with the Economist Intelligence Unit, where economists can evaluate policies and laws in various countries that have a high number of displaced people to examine how these laws affect these people.”

What are the main challenges that you face in working while investing with migrants?

We face several challenges, and we created four pillars of engagement to help overcome those challenges. The first is focused on Mobilizing Capital; which means that investors generally understand the enormous issue of displacement but they don’t know how to engage with it, how to source investments in this space, and they don’t know what refugee investment entails, so we try to involve them more into the conversation to let them be part of the solution.

Another challenge is Defining the Field, which is our second pillar. We try to create a sort of refugee investment lens, in which we have six types of investments to help create a broad field of possible investments. We define “refugee” differently than the traditional definition, in the sense that it combines internally displaced people.

“We created the “paradigm shift” report in which we describe displaced people as highly entrepreneurial; they’re creditworthy, hard-working, loyal employees and should be seen as an opportunity economically as well as socially.

The third challenge is Changing the negative Narrative that surrounds displaced people and categorizes them as a burden, helpless or dependent on society. We try to point out that these people can be looked at as an opportunity, not as a challenge.

We created the “paradigm shift” report in which we describe displaced people as highly entrepreneurial; they’re creditworthy, hard-working, loyal employees and should be seen as an opportunity economically as well as socially. They should be integrated into society rather than isolated, which bring s us to our fourth pillar; Changing Policy. These people are held in limbo, they are not allowed a work permit, a bank account in many situations, and they’re often not allowed to work in certain professions.

Policies often ironically restrict the freedom of displaced people and create more problems than they solve. We created the Refugee Opportunity Index with the Economist Intelligence Unit, where economists can evaluate policies and laws in various countries that have a high number of displaced people to examine how these laws affect these people.

We now develop 60 to 70 question indicators to measure the refugee opportunity index. You know the acronym ROI? Return On Investment, this would be the Refugee Opportunity Index. We want to show to direct investors which countries have policies and have opened the economic freedom market door to displaced people, so these people can be integrated to contribute to the society, tax base, and economic ability.

To some of these countries, displaced people are drivers in the economic field, such as in the USA. We hope to incentivize governments to attract impact investors and capital to change policies in these areas. We designed these pillars in a way to attack each of the challenges which hold back solving the crisis. 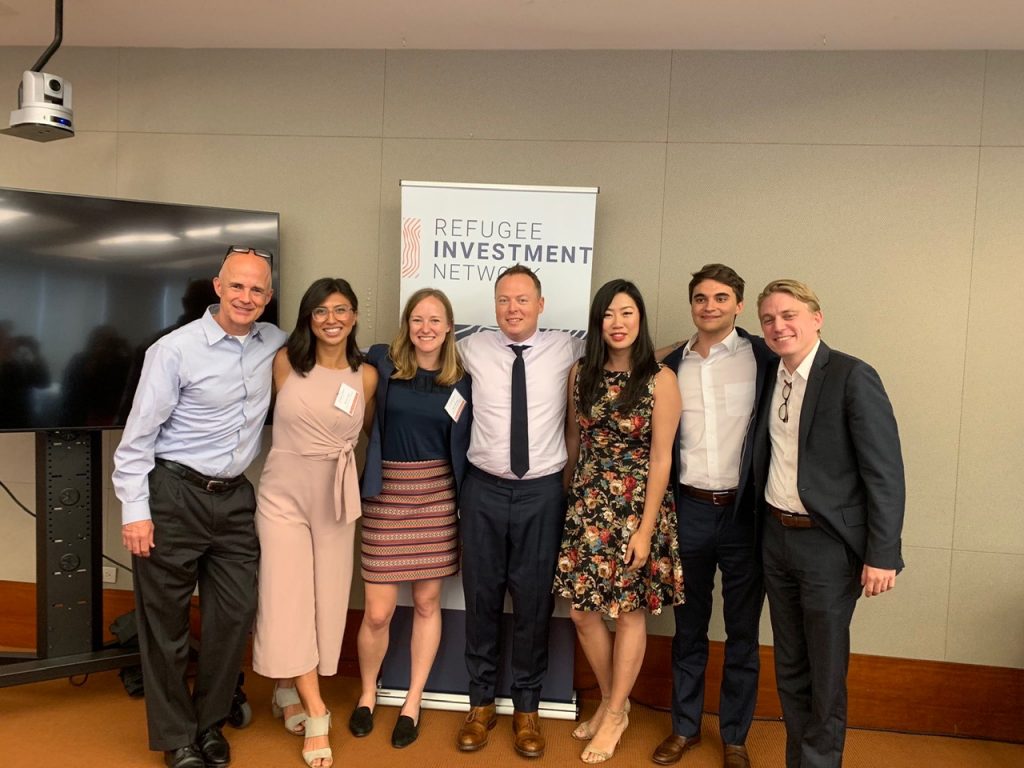 “The potential of these people as entrepreneurs is tremendous, and our mission is to spread that notion and to mobilize capital intentionally into this area.”

How do you define impact investment?

Some people call impact investment a double bottom line, but the idea is to see a financial return on investment from investing with refugees. It is not charity or philanthropy, but rather a real investment with a sort of social component.

In our case, we look to engage funds and investors who want to make a durable or sustainable impact as they’re making money on the investment. They also need to be concerned with social return because it is targeted towards improving the lives of these people.

What do you think is the potential investors can find in refugee entrepreneurs?

There are statistics that people never believe, but first or second-generation Americans established 44% of Fortune 500 companies. We don’t have the data that indicates that these people are immigrants or if they were forcibly displaced. The point is that the return investors earn will be both social and financial. The potential of these people as entrepreneurs is tremendous, and our mission is to spread that notion and to mobilize capital intentionally into this area.

What are the biggest achievements of the Refugee Investment Network (RIN) so far?

We have many achievements, we can talk about the Euroconference as we had the opportunity to come out and speak about what we do in a public forum. Often, when people hear about refugee investment, they think of it as an oxymoron or sort of a non-sequitur that doesn’t make sense. We’ve had a lot of opportunities to shape the dialogue around this issue and to introduce it in the investment space.

In each one of our four pillars, we have seen success. In the mobilizing capital space, we’re currently working with over $400 million worth of investor funds as our knowledge partners are in the creation of various funds that will be invested using our investment lens.

There is a $50 million SME fund that’s called the migrational refugee which will be invested across emerging markets. There’s also the $100million fund targeting Jordan and $250million to $500million fund towards Mexico.

We believe other funds will follow suit because there’s a lot of interest in the capital now, not only by impact investors but also by religious pension funds. We tell them we have done green investment, micro-financing as well as some gender investment, so why don’t you have a product for us to engage forced migration. That’s what the RIN is all about, building an investment thematic that allows capital to follow into this area to identify and invest in these opportunities. The RIN opens the door to that capital and also to change the negative narrative around it.

“This also means that not all displaced people are entrepreneurial, but to be an entrepreneur is to have a special skill set that some people happen to have.”

6- What are your plans for the future?

We always want to scale because the displacement crisis today is the worst and it’s going to increase. We’re very concerned by people being displaced by climate change in addition to the traditional drivers of displacement. We need to scale to meet these challenges; we want to popularize the idea behind refugee investment and we need to expand our organization more globally.

“What’s impressive is that displaced people are highly entrepreneurial, and often they don’t need advice, what they need is access to capital.”

What would you advise a person who migrated from their country and wants to create a business?

What’s impressive is that displaced people are highly entrepreneurial, and often they don’t need advice, what they need is access to capital. We try to turn on the tap of capital and let them not be constricted or limited in resources. This also means that not all displaced people are entrepreneurial, but to be an entrepreneur is to have a special skillset that some people happen to have. We want to suggest that everyone has the potential to be an economic actor, to engage, to help build economies, and contribute to economic growth and that everyone should have that opportunity.

There’s a growing number of non-governmental organizations that help incubate and accelerate the refugee and migrant entrepreneurs, like SINGA Business Lab incubator. It helps people to create business plans and to identify capital opportunities. Some people who’ve been displaced are unaware of the resources that are out there, so this is one advice I say, look for these incubators and accelerators that can help you build your business.

“We hear a lot about the green investment to improve our climate, we need to improve our social climate as well; a climate that embraces rather than rejects people”

Why do you think building an international ecosystem is important?

Building an international ecosystem is important because ultimately there will be a movement not only in the Middle East but also globally; we need to change this narrative and to raise the bar on the dialogue. The development and humanitarian communities are starting to appreciate the private sector as part of the solution. The private sector in the conscious capital needs to be integrated into this conversation.

Conscious capital doesn’t only have to be for displaced people but for any social ill that can be improved by the private sector. The network that we try to build has been part of this conversation. We hear a lot about the green investment to improve our climate, we need to improve our social climate as well; a climate that embraces rather than rejects people. This is a global phenomenon and doesn’t only happen in a couple of places, it impacts many countries around the world. It requires people locally and organizations to be engaged in this global movement to change these negative narrative for the good.